The Storyteller by Jodi Picoult 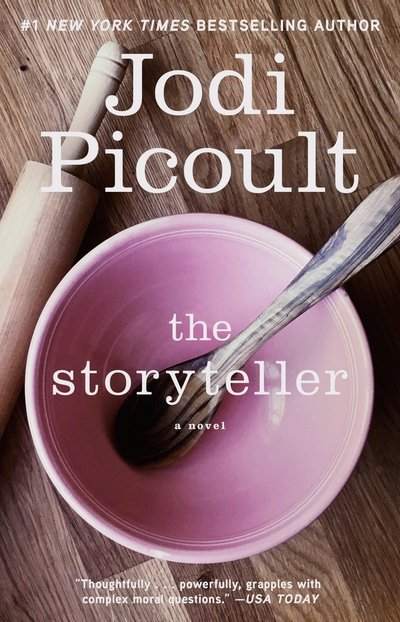 “The Storyteller” is a difficult novel.  It will immerse the reader into a time that many would rather forget, or even deny existed.  It will bring the reader to tears. It will wrench deep anger from the soul.  It will also teach us that forgiveness is something we do, not for the offender, but for ourselves.  For without the capacity to forgive even the most unforgiveable offense, we give up the ability to experience joy.

Sage Singer works nights at a bakery, avoiding relationships, and people in general.  She feels broken, and she IS scarred, both mentally and physically, after a being the driver in a tragic car accident in which her mother is killed.  But her life changes when she meets an elderly man as she attends group grief counselling.

Joseph Weber, an old man with a terrible secret and an assumed name, befriends Sage.  In spite of their age difference, they see in each other hidden scars that others cannot see.  Everything changes the day Joseph confides his awful secret and asks Sage for an extraordinary favor that could have both legal and moral repercussions for her.

Minka is Sage’s grandmother, and is not only a writer, but a survivor of the World War II Holocaust. She writes a fictional story of a beast of fantasy and legend that, in some ways, mirrors the horrors of Camp Auschwitz.  The telling of this story helps save her life in that unspeakable place.

Ania, Damian, Aleksander and his brother Casimir, and Baruch Beiler, are all characters in Minka’s fictional story.

Leo Stein, a Jewish “Nazi Hunter” with resources available to either confirm or debunk Joseph’s story, works with Sage to get to the truth, comparing Joseph’s story to the one Minka tells Sage: The story of her life as a young girl in Poland, before and after the Reich. The family members and friends she lost to the Nazi Regime. The horrors she and others were forced to face while trying to survive life in the Nazi concentration camps.

Author Jodi Picoult masterfully weaves all these stories together to form a single picture of family love and loyalty, horrible terror, guilt, and forgiveness.  How much torture can one be subjected to and still survive?  Where does the strength to endure come from?  How does one live with crushing guilt?  How deep must one dig to finally find forgiveness for the unforgiveable?

New Book at AF Library: The Last Thing He Told Me by Laura Dave