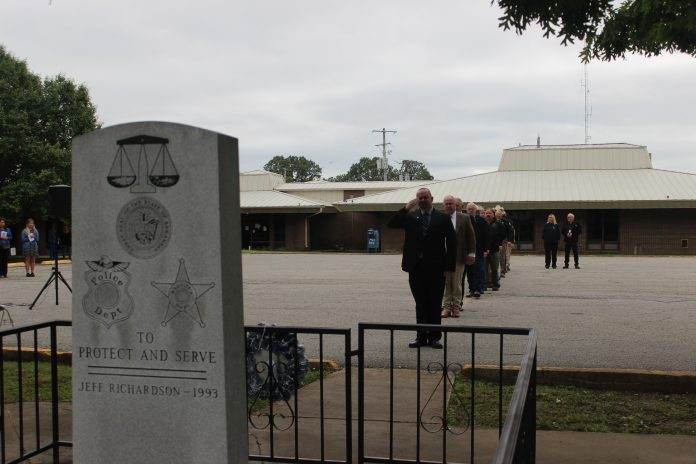 Sharp County held its 28th annual Police Officer Memorial event May 10 on the grounds of the Sharp County Courthouse.

“We missed out last year because of COVID but I am so thankful that this year we could come together as a team like we always do when there is a crisis or a situation. We want to remember our fallen officers,” Sharp County Judge Gene Moore said. “During this time, we’re thankful for those men and women who served us right here in our own community. We are blessed with a lot of wonderful officers.”

He then introduced the guest speaker for the event, former sheriff, Dale Weaver who serves as a member of the Fulton County Sheriff’s Department.

“20 years ago, I was the guest speaker for this event. I had visited the Law Enforcement Memorial in Washington D.C. about a month earlier and since that time, they have added 3,485 names to that memorial. This past year they added 362 and five of those were from Arkansas,” Weaver said. “For a police officer, being in the presence of that memorial, is like a veteran walking through Arlington cemetery. It is a very moving experience.”

Weaver said in his 40 years serving in law enforcing, police officers had not been under attack as they are today.

“I think about all the negative things we have seen and that have been done, but I think the majority of the American people want good law enforcement and support law enforcement,” Weaver said.

Weaver went on to share words of experience and uplifting comments with his fellow law enforcement officers.

Following comments from speakers, each officer took a turn saluting the Fallen Officer’s Memorial located on the property. The name of Jeff Richardson, a former Cave City Police Officer who lost his life May 21, 1993 during a vehicle crash while attempting to respond to a call for help’s name is engraved upon the memorial.