Hallmark Times It matters to us, too...
HomeWeather ExtraLa Niña predicted for 2021-2022 winter
Weather Extra 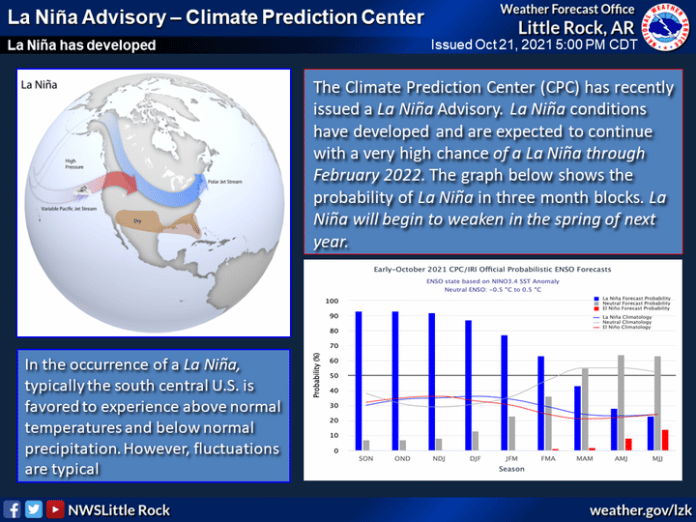 A La Niña has developed in the equatorial Pacific ocean and is expected to continue through the winter and into early next year. As a reminder, a La Niña occurred last winter as well. La Niña is a weather pattern occurring over the Pacific ocean which has a tell tale pattern of effect on the weather throughout the world.

“La Niña means Little Girl in Spanish. La Niña is also sometimes called El Viejo, anti-El Niño, or simply “a cold event.” La Niña has the opposite effect of El Niño. During La Niña events, trade winds are even stronger than usual, pushing more warm water toward Asia. Off the west coast of the Americas, upwelling increases, bringing cold, nutrient-rich water to the surface,” according to the National Oceanographic and Atmostpheric Administration (NOAA).

According to NOAA, “During La Niña, waters off the Pacific coast are colder and contain more nutrients than usual. This environment supports more marine life and attracts more cold-water species, like squid and salmon, to places like the California coast.”

With chancy weather, keep the weather radio and phone on