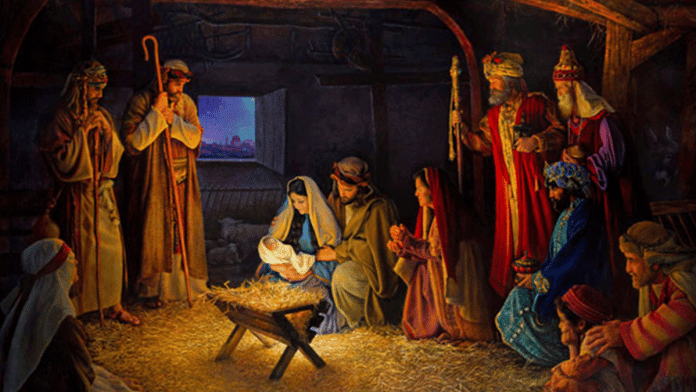 Well, It’s another Sunday Morning. “In those days a decree went out from Caesar Augustus that all the world should be registered. This was the first registration when Quirinius was governor of Syria. And all went to be registered, each to his own town. And Joseph also went up from Galilee, from the town of Nazareth, to Judea, to the city of David, which is called Bethlehem, because he was of the house and lineage of David, to be registered with Mary, his betrothed, who was with child. And while they were there, the time came for her to give birth. And she gave birth to her firstborn son and wrapped him in swaddling cloths and laid him in a manger, because there was no place for them in the inn.” Luke 2:1-7 (ESV)

I love this story of the birth of our Lord. This is an account of that glorious night when the Savior of the world was born as told by The Innkeeper:

They think I’m some kind of cruel and heartless person. But they’re wrong, totally wrong! How could I have known, I mean really, how could anyone have known?

To us it was just a big house. My grandfather, Joshua Farquhar, built it back when his trading business was at a peak. He built it big enough to fit all fourteen kids when they were all living with him. When he passed away I was willed the house. I guess you would call it an inn now, but to us it was home. See, our kids were all grown and gone it was just Rachel and me now, so we just let out the word that we’d take people in, and they started to come. Every night we’d have a person or two, sometimes more. People would always come back when they came to town again, intent on another bowl of Rachel’s lamb stew.

Then they came along with that crazy census the governor thought up. People from all over the province flooded into town that week. We filled up so quickly, not even floor space left. Rachel and I slept in the main room where we always did, and we started putting guests in the other three rooms. They kept coming, then we doubled up two or three families to a room. Finally, when we had filled the main room with four families plus Rachel and me, we started turning people away. I must have gotten in and out of bed ten times that night, stumbling over bodies to get to the door. “There’s no more room, sorry folks.” I just couldn’t make any more room and that’s the honest truth.

Then came that knock, when I opened the door there stood Joseph, he was a burly man with big arms and strong hands, down from Nazareth, I think he said. He wouldn’t take “No” for an answer. I would say, “No, I’m sorry,” and he’d tell me about his “Little Mary.” Well, when I saw “Little Mary,” she wasn’t very little. She was just about as pregnant as a woman can get, and awfully pale.

While Joseph was pleading, I saw her grab her tummy in pain, and I knew I couldn’t let her have that baby outside on that cold windy night. I know you think I was wrong for not turning everyone else out and give the whole house to them, but I just didn’t know. I said they could use the stable if they’d like, that’s all we have left. He said it would do, so I led them and their donkey out back. Joseph said, “We sure are grateful, sir.” I left them there and checked on some of the people sleeping outside, making sure that were as comfortable as they could be. I lost track of time, but couldn’t have been out there more than an hour or two at the most when I returned to Rachel.  I hadn’t much more gotten back in the warm main room when Mary gave birth, it was a boy. I looked out the window and the lantern was blowing almost out, the cattle were lowing softly, and baby Jesus was already asleep in his mother’s arms.

I was about ready to step over the sleeping bodies, put out the light, and get under the warm covers, when I heard some murmuring out by the stable. I though what now?, so I got up again and went back to the stable. When I peeked in, I saw shepherds; raggedy, smelly shepherds and they were kneeling down on that filthy barn floor as if they were praying. The oldest one was saying something to Joseph about angels and the Messiah. And the rest of them just knelt there with their heads bowed, some with tears running down their faces. I coughed out loud, and Joseph looked up. I was ready to run all those shepherds off, when Joseph motioned to me with his hand. “It’s okay,” he whispered. “They’ve come to see the Christ child.”

The Christ child? The Messiah? I felt a rush of emotions. Was this really true? I tried but I couldn’t hold back my tears, they started rolling down my face as if I had never cried before. That’s when I knelt, and watched, and prayed, and listened to the old shepherd recount his story of angels and heavenly glory, and the sign of a holy baby, wrapped in swaddling bands, to be found in a stable-manger. My Lord, it was my stable where the Christ child was born. My manger he rested in. My straw, my lamp, How could I have known! The shepherds left after a while. Some of them leaned over and kissed the sleeping Christ child before they departed, I know I did. I went in and told Rachel of the wonderful thing that had just happened in our stable.

I will tell you this truly, I will always be glad I made room in my stable for that family, that holy family. If I would have only known I would have given them the entire house and that’s the honest truth. You see, I’m not some mean innkeeper, some heartless person, I just didn’t know. I know now though,  I was there. I saw him. And, you know, years later that boy came back to Bethlehem, this time telling about the Kingdom of God. Oh, I believe in him, I tell you. I was there. And, mark my words, if you’d seen what I’ve seen, you’d be a believer, too.

Merry Christmas my friends, God truly loves each and every one of you and so do I.

What He did for us