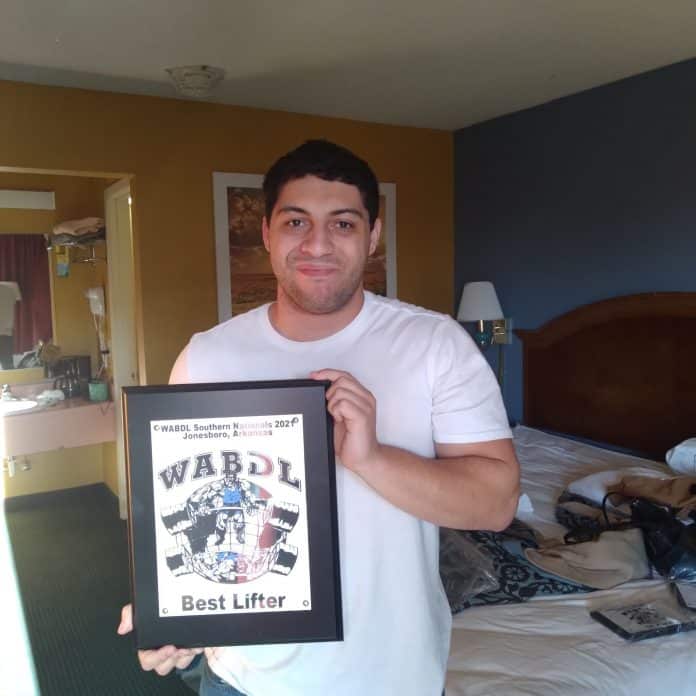 Joe Shelton, a 26-year-old Sharp County man recently broke a world record as he competed in the Southern National’s World Association of Benchers and Deadlifter’s (WABDL) weightlifting competition earlier this month in Jonesboro.

Shelton has autism but does not allow it to slow his dreams of becoming the strongest man alive.

“When I was four years old, I saw the strongest man competition and I started lifting rocks,” Shelton said. “I knew and know I can make good money later on in life. I also do this for the love of my life. For a long time, I was training until my arms and legs would give out… I want to be number one.”

Shelton was forced to slow down temporarily after acquiring an injury during training. As a result, although on light duty, he continued to train, but he noticed a weight increase which was jeopardizing his weight class for the upcoming competition.

“I had gone over my weight class, and so I was able to get help from a professional wrestler,” Shelton said. “His name is Timothy Phillips, but his stage name is Rickey Rodeo. He told me what to do and I did it and I was able to make my weight.”

“I got first place in that in a regular category with regular men, not men with disabilities so I’ve proved I can compete even with them. I’m only mentally challenged not physically so if I can do it anybody can do it,” Shelton said in a Youtube video recap he recently published regarding the competition.

He also walked away with the WABDL Best Lifter Award.

When asked how it felt to break a world record, Shelton said it was a surprise for him an not something he had anticipated when entering the building to compete.

“I did not think I would break a state record let along the world record. The world record was 336 pounds for the Disabled Men’s Category in a 220 pound weight class. I thought it would be a tie, but one of the officials had put an extra pound on the bar and it made the weight 337. I didn’t know he had added it to the bar, so after I lifted it, they announced a new world record,” Shelton said.

Looking to the future, Shelton said he is trying to raise funds to be able to travel to the world championships in Reno, Nevada, in November of this year.

“I am on disability and I live off the check. The money will go to help with the hotel, weigh in, food, water and travel expenses,” Shelton said.