Rabies in Sharp County; is your pet vaccinated? 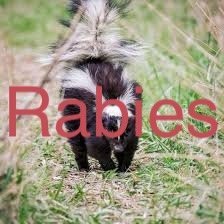 At least two dogs in northern Sharp County have been exposed to rabies after an encounter with a skunk.

The Arkansas Department of Health confirmed the skunk to be positive for rabies, a highly contagious, dangerous, and deadly disease which can be spread from animals to humans.

In speaking with a local veterinarian, it was stated Dr. Laura Rothfeldt, the Arkansas Department of Health Public Health Veterinarian was consulted regarding both dogs that were exposed and best practices for next steps.

Since both dogs had previously received rabies vaccines from a licensed veterinarian, Dr. Rothfeldt recommended the dogs receive a booster vaccination and be under observation. According to the Arkansas Department of Health, “Rabies is a deadly viral disease that affects the nervous system of warm-blooded animals, particularly mammals.

It is usually spread by an infected animal biting another animal or person. Rabies is a fatal disease that almost always leads to death unless treatment is provided soon after exposure. In Arkansas, rabies lives and circulates in wild skunks and bats.

“Any mammal can become infected with rabies, including domestic pets such as dogs and cats, agricultural animals such as cows and horses, and people when they are exposed to rabid wildlife,” a representative said.

In the State of Arkansas, it is the law that all dogs and cats be inoculated by a licensed veterinarian.

“Arkansas rabies law requires that all dogs and cats must be vaccinated against rabies by four months of age by a licensed veterinarian. One shot is not enough; rabies vaccinations must be kept current so talk with your veterinarian about when your pet needs its rabies booster shots,” the representative said.

Although it is unusual for cases of rabies to be seen this late in the year, veterinarian Dr. Donna Shaw said it does happen.

“Summer is typically peak season for rabies cases because during the summer months it is warmer, and the animals are more active. It is less common to see cases in the colder months,” Shaw said.

Once rabies enters the body, it travels along the nerves to the brain and depending on the location of the bite, symptoms may not present immediately.

“It can take a couple of days but can even take weeks or months to show signs. Rabies can only be transferred through saliva contamination in a bite or maybe a scratch, and from direct contact with central nervous system tissue such as spinal cord or brain. Rabies virus is not transmitted through blood, urine, feces, or skunk spray. For example, if a dog is bitten on its back paw, it will take longer for the dog to show symptoms because the virus travels up the nerves to the brain. If a dog is bitten on the ear, it would not take long at all before they show symptoms because the location is so close to the brain,” Shaw said.

Signs of rabies include the infected animal showing anxiety, aggression, restlessness, and erratic behavior; weakness, poor coordination or tremors are also symptoms. Raccoons, bats, skunks, foxes, coyotes and other wildlife may be carriers and spread the virus.

Wildlife infected with the virus tend to lose their fear of humans and other animals and species that are nocturnal may be seen wandering around during the day. It is vital for pet owners to ensure their pets are inoculated for the rabies virus as it improves the chances of survival should an exposure occur.

Additionally, unvaccinated pets may have to be euthanized if exposure occurs.

“Dogs, cats or ferrets that have never been vaccinated and are exposed to a rabid animal may need to be euthanized or placed in strict isolation for an extended period of time,” a representative from IMRAB said. If an exposure occurs, contact your veterinarian immediately.

Also, if available, contact animal control if your pet is bitten by a wild or stray animal. Rabies is a highly communicable disease, and it may not just be the family pet at risk of infection.

Since the virus is transmissible to humans it is important to watch out for your own health as well. According to the American Veterinary Medical Association (AVMA), if you are bitten, don’t panic but do take action. “Wash the wound thoroughly and vigorously with soap and lots of water, call your physician immediately and explain how you were bitten and follow instructions from your physician or seek medical treatment at the Emergency Department. If possible, confine or capture the animal under a large box or other container if that can be done safely and once captured, don’t try to pick up the animal but rather call the local animal control authorities.

If you cannot capture the animal, memorize its appearance and where it went after biting you,” the AVMA stated.

“If it is a wild animal, only try to capture the animal if you can do it without getting bitten again. If the animal cannot be contained, it must be killed to prevent escape. Do so without damaging the head. Report the bite to the local health department.”

Although rabies vaccinations for animals are available at the local farm store, it is not recognized by the Arkansas Department of Health unless the vaccinations are provided by a licensed veterinarian which is also state law.