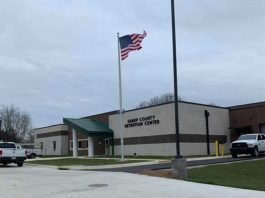 The Sharp County Jail will be open to the public on Jan. 8, from 10 a.m. until 4 p.m. for tours.
Coming in at more than $1.8 million under budget and ahead of schedule, Sharp County Sheriff Mark Counts said the new jail will be an asset for the community.

“It’s exciting. Jan. 8 they’re going to turn the keys over to us and we will hold a grand opening that day. We will have tours and will be practicing social distancing. We will have masks and hand washing stations and keep people spread out during the tours,” Counts said. “We want people to feel comfortable when they come to look through the jail.”

Counts said the event would start with a ribbon-cutting by the Spring River Area Chamber of Commerce.  “This is a big deal for our community. We will have a deputy here so if someone couldn’t make it earlier in the day but got here at 4p.m. they can still tour the jail,” Counts said.

Counts said if all goes according to plan, the jail will be in full use on Jan. 11.
“All of our jailers, administration and staff have been going through training the last two weeks on how to use everything. We’re getting close and in what I’d call the midnight hour, we’re putting the finishing touches on everything,” Counts said. “It is such a nice and clean place and the old jail is old and worn out.”

Counts said during the recent quorum court meeting, representatives from South Build Team announced the jail would be completed far under the projected budget. “They had come to us before and said it was going to come in under budget by $1.2 million, but at the last meeting, they announced it would come in $1.8 million under budget which is a blessing. That is even with having to fix a few things along the way,” Counts said.

“Initially, we thought it would take about 10 years to pay it off and then that half cent will drop off and we will just have the quarter cent to operate with. In our first year we were able to make extra payments. We’re going to be able to pay that off sooner and that is exciting to see,” Counts said.

The new 100-bed facility is not only secure but was designed to have longevity as a state of the art facility. “We have things here we don’t have at the old jail. We have three ‘drunk tanks’, two mental commitment cells and that will be a big help. Typically, you don’t need three ‘drunk tanks’ but in the summer, it happens and when you need them, you need them,” Counts said. “Over the last year with COVID as the main concern, we were not able to quarantine over at the old jail, but here we will be able to.”

The new facility has four large pods in which inmates will be housed. Counts said it will allow for quarantining in a way that was not possible before.  “With the four pods, there are lockdown cells on the bottom and that makes it so we separate people if there is a problem. Then up top, there are dormitory-style beds. Standards say we can classify by misdemeanor, felon, convicted felons, female and ones waiting to go to trial or by violent and nonviolent. What we want to do is violent and nonviolent,” Counts said. “We will have one pod for ladies and the remaining three for men.”

In addition to the sections which will be used to house inmates, Counts said the new structure also has safety precautions built-in which are available to employees in the case unrest breaks out. “If one of the jailers had to use pepper spray, there is a button they can hit and within one minute, it takes the air in the room out and cleans it. If someone had to use pepper spray as a line of defense, they could clear that room to get the spray out so nobody else has to suffer,” Counts said. “Another thing which was installed we didn’t have before is a grinder pump. In the old jail, people would stuff clothing or other items into the drains and clog them. With this grinder pump, it will keep that from happening and also protect the city workers.”

Counts said the new jail also has a courtroom located in the secure portion of the facility and paperless systems for families to communicate with inmates. “In each of the jail blocks, there is a phone and in the lobby there is a phone and so they can see one another and talk back and forth. Also on the computer they have, they can send medical requests, look at books, send an email to their family and so we don’t have the paper back there causing extra problems,” Counts said. “Once the inmates come in here unless we just have to do something different, we want to keep them in the facility until it is their time to go. We put a courtroom in here and will have the first appearances here for people in jail. So the plan is for the regular court to happen at the courthouse and then the judge will come over here and hold court in house.”

Counts said he would like to thank the community for their support and willingness to allow the county to construct a new jail. “Our old building was only a 36-bed facility and this wouldn’t be possible if it wasn’t for the taxpayers. This is something we’ll have for years to come. It was built right and I want to thank everyone for allowing us to do this,” Counts said.