Hallmark Times It matters to us, too...
HomeHumorLauren and the slingshot adventure
Humor

Lauren and the slingshot adventure 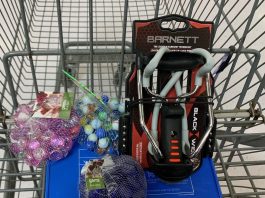 So, my entire life, I have had the utmost support from my family. There has never been anything they have told me I could not do. Whether this has made me over confident or provided me with the correct amount of confidence remains to be seen.

For many years now, I have had my eye on a gadget that I have wanted. A simple child’s toy…the slingshot. By the way, it is absolutely not a child’s toy. Do not make the same mistakes I have. I hope in sharing this story with you, I might save you some heartache.

I am in the store, a few bucks burning a hole in my pocket, and I decided that It was time. I was to finally purchase the coveted slingshot.

I walk up, looking at the options and having done no research whatsoever, I confidently snatch one off the shelf, hearing an angelic choir sing as I raise it in the air… Meanwhile, others in the store who do not hear the music think that I am having a severe muscle cramp and that I’m trying to stretch it out as I’m holding the slingshot in the air, and just standing there like a gold medalist at the Olympics.

“Ma’am… can I help you?” I hear snapping me from my moment of bliss.

“Oh uh…hey, do ya’ll have any ammo?” I ask a little too eagerly for the comfort of the sales representative.

Thinking I am talking about ammo for a firearm I am certain, the employee quickly responds they are sold out.

“No, I mean for this,” I say, nearly smashing the slingshot in the man’s face, maybe a little too exuberantly.

He then points to a small package of glass balls and tells me that is what is available.

Standing there and being the outside-the-box thinker I am at times when my common sense has abandoned ship, I ask if marbles will work. (Slingshot ammo is like $5 and marbles are like $2).

He nods in kind of a circular motion and provides an “I’m not sure,” but my mind goes YES! Yes they will. I thank him and speed off.

While on my way, sauntering at the pace of the hundred meter dash toward the marbles, I get the bright idea to also purchase some of those things you’d put in the bottom of fish tanks or in the glass bowls with flowers. Those…those are not round at all by the way. Something that will matter later in this saga.

So, I get to the toy section of the store, two bags of the ‘not round’ glass rocks already in hand and snatch the last bag of marbles from the shelf.

Now, in my mind… I am gonna be really good at this.

So, I get home, get my work done and then my moment has arrived. I am finally ready to go forth and slay aluminum cans and whatever else comes my way.

Now, I do believe in slight research and I like my information boiled down to facts and the shortest version thereof.

Unlike searching for online recipes where you read someone’s life story before finding out how many cloves of garlic go in to the pot, slingshot videos are pretty short and to the point.

I am fascinated watching people light matches, blow out candles and other things with an amazing level of accuracy. I come upon an expert who basically tells me before I’ve even begun that I have done literally everything wrong. Wrong ammo, wrong type of slingshot…. I should have flat straps instead of the catheter style tubing I was holding in my hand. I should have no wrist brace or a better wrist brace…

“Don’t let the bastards grind you down,” I mutter as I trash talk to myself about the expert who is trying to prepare me mentally for the realities of using a slingshot.

Shortly after, I discovered I was no longer watching slingshot videos but was instead watching sling videos. Slings are not the same, they’re like a pocket with strings and you just hurl heavy items really fast at stuff.

Snapping back from my 45-minute side track to other way of flinging objects that don’t include throwing them, I decide I’m ready to go and prove myself an expert.

As every critter with in a three mile radius sees me approach they head for the hills. I did, however, remember a few things from the so called, match-lighting, candle blowing expert and did have the good sense to shoot away from vehicles and other fragile items.

Good thing, too, as believe it or not, the guy was right about ‘not round’ things and the directions they may choose to take when shot like a rocket from giant rubber bands.

“Practice” was stated multiple times during the video, so I did. I practiced missing with about 10 rounds of ‘not round’ objects before I tired of hearing all of the aluminum cans laughing at me.

Now I will say this. I may not be able to hit the target, but were the goal to hit a large moose, elephant, moving van or other oversized object, I would have been highly successful in my endeavor to strike it.

I am now more confident than ever…that I…need to practice.

Moral of the story, use the right tool for the right job. Research before you buy. Inspect before you buy as my slingshot, now fondly known as Loppy, has one strap a solid half an inch longer than the other, ensuring I will almost never be able to hit a target while aiming straight on.

BUT Now, I’m on to bigger and better things, and I am confident I would be highly successful with a sling. Now to find videos of how to weave a pocket and attach strings to it. This is gonna be great!

He read a book with his human

Success on the first attempt