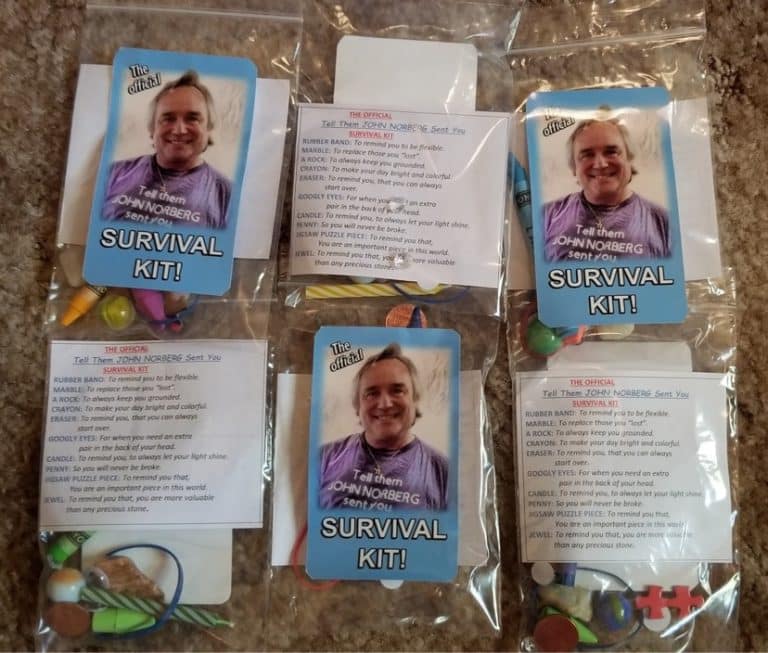 While out and about in today’s world it never hurts to have some friendly advice and at times, even a survival kit.

Cherokee Village resident John Norberg offers both with the creation of his official, Tell Them John Norberg Sent You Survival Kit.

The kit includes many items to help one to navigate safely throughout the day and is intended to provide reminders using simple items.

“Several years ago, I saw a stress relief bag and it had starburst, Hershey’s kisses and things like that, but I figured the candies would not last and I wanted something that would last forever and they could then think about each item and possibly share the items with family and friends and put a smile on someone’s face,” Norberg said.

Each item inside the survival kit comes with a meaning and a guide on how to use each item.

“They all have meaning that can help you through the toughest times. It is a reminder of how even the simplest things can remind you of what you can do,” Norberg said. “For example, a rubber band to remind you to be flexible, a rock to keep you grounded and so on.”

One item located in the survival kit is particularly important to Norberg and comes with a special meaning going back decades.

“There is a marble. My brother Mike is the one who gave me the idea for the marble. He is 10 years older than me and always carries one. He would ask people if they used to play with marbles and they will usually say yes. He will ask what happened to them and they’ll tell him they don’t know,” Norberg said. “So, he’ll reach into his pocket and hand them a marble so they can say they haven’t lost all their marbles. No one should ever lose all their marbles. He’s been doing it for years.”

Norberg said he also has been known to carry a marble or two with him since the tradition began with Mike.

When asked why he selected each item for the survival kit, Norberg said he wanted each item to be a reminder and lift the spirits of the individual carrying the kit.

“I wanted things that would remind people of how special they are. Like the jigsaw puzzle piece to remind them they are an important part of this world. Everybody is important, and they all have things they can do and they matter,” Norberg said. “So much is going on in this world and people think they can’t make it through, but I want people to see simple things that can help them make it through.”

Norberg said he purchased the items for the survival kits and sells them for $2 each. After selling $50 worth of kits, Norberg said he will select an individual at random who is a member of the Tell Them John Norberg Sent You Facebook page and provide them with a $25 gift certificate to a local business of their choosing.

“The local people will get a $25 gift certificate to a local business I have featured on my Tell Them John Norberg Sent you page. If they’re out of the area, I’ll ask them what small business in their area will they promise me they’ll spend it at and I’ll get it to them. There is no purchase necessary anyone who is on that page is eligible,” Norberg said.

Norberg said the survival kit was launched the same weekend as the opening of the Spring River’s Farmers Market earlier this summer.

Norberg said if an individual does not live in the area, but would like to purchase a survival kit, they may contact him through his Facebook Page.

Additionally, if enough kits are sold, Norberg hopes to create a scholarship to Ozarka College.

“It may only be $100 a year, but I’m going to use this to promote our businesses,” Norberg said. “I’ll be at the farmers market through the last week in July in Cherokee Village selling them.”