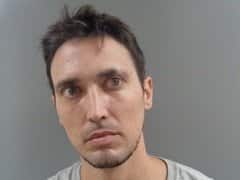 An Izard County Man was arrested and is being held in the Izard County Detention Center after breaking into a neighboring apartment, stabbing holes in the walls, destroying property, hanging stuffed animals by the neck from the ceiling and leaving handwritten notes.

According to an affidavit for arrest filed Oct. 5, on Oct. 3, 34-year-old Luke Dennis was found by the victims daughter inside the apartment when she had gone to ensure the doors were locked.

Deputy J. Barnes was dispatched to a residence on Highland Street to speak with a witness who stated her mother had asked her to come and lock the apartment as she had left the doors unlocked for maintenance to be done.

When the witness entered the residence, she saw Dennis sitting on the couch with a knife in his back pocket. She then noted the apartment was in disarray and told Dennis to take the knife out of his pocket and leave.

In speaking with the victim, Barnes was told she had not given anyone permission to be in her apartment except for the witness who was sent to lock the doors.

Photographs of the damage to the apartment were taken including a knife that had been stuck into the wall in the kitchen area, black residue in a sink where something had been burnt, a mirror and knife In the bathtub and more.

When the victim was able to return home, she explained to authorities that she had paid Dennis and his girlfriend Kentessa Langston $20 to drive her from Mountain Home back to her apartment, however the two never showed up to pick her up.

The victim also showed investigators where Dennis had destroyed her stove and light in the restroom, plunged a knife into the ceiling of the bathroom, and driven knives into several other areas in the home.

She then showed investigators the handwritten notes left by Dennis, one of which read “…if only I had one, thanx for not being there tonight, I needed some alone time, I’m with tesla or me casa…” he also provided his phone number and stated “must say look for Luke for work or else.”

A photograph lineup was provided to the victim through which she identified Dennis. The phone number left on the handwritten note was also confirmed by Probation Parole Officer Charles Slater to belong to Dennis.

Dennis has been charged with residential burglary, a class B felony and criminal mischief in the second degree, a class B misdemeanor.