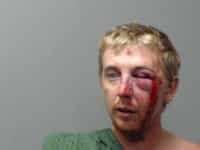 A Gassville man, has been arrested and is being held in the Baxter County Detention Center after he reportedly brought a firearm to the Baxter Regional Medical Center.

According to an affidavit for warrant of arrest filed July 29, Daniel L Chentnik, 32, has been charged with aggravated assault, a class D felony; terroristic threatening, a class D felony and resisting arrest a class A misdemeanor.

The charges stem from an incident July 27,a call was made to the Mountain Home Police Department reporting a man with a handgun in the parking lot of the hospital.

When officers arrived, they found Chentnik armed with a handgun and a bullet proof vest with several magazines attached to the vest.

Officers were able to talk Chentnik out of his vest and he dropped the handgun but failed to obey other commands.

He was tasered, tacked from behind and taken into custody. During the take down, he sustained injuries and was taken into the hospital for treatment.

While in the hospital he continued to be combative and was restrained.

It was later discovered he was both suicidal and homicidal.

He had come to the hospital after speaking with a grief counselor but still intended to harm himself.

His wife told authorities when they arrived at the hospital, he called her to the driver’s side of the vehicle and held a firearm to his chin.

When his wife began to call 911, Chentnix stated he couldn’t pull the trigger on himself so he would have the police shoot him.