Hallmark Times It matters to us, too...
HomeCommunityAsh Flat wins best tasting water in the State of Arkansas
Health & FitnessLocal Government 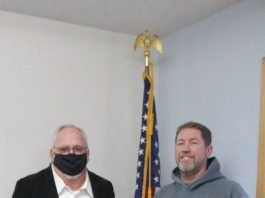 When asked how the award recipient was determined, Sternberg said all entries are judged independently and when results are in, the recipient is notified. “We have three independent judges. They taste for water quality, clarity and smell. Any city or public water company can participate and this was the 15th year we’ve had this competition,” Sternberg said. “Each year, we get more and more entries, but this was an unusual year because we normally do it at our conference in Hot Springs but due to COVID we had to cancel that. So we held it at our training facility in Lonoke.”

The judging for the best tasting water in Arkansas took place in the fall of 2020 and Sternberg said the competition is not yet over. “They will be competing in the national Great American Water Taste Test. It’s normally held in Washington D.C., but due to COVID, it will be held in Duncan Oklahoma which is where the headquarters for the National Rural Water Association is located,” Sternberg said. Sternberg said Ash Flat will compete against the rest of the United States for the title of best water in the nation. In the coming days, Sternberg said a special container would be sent to Ash Flat and Breckenridge would then fill it with water from Ash Flat and ship it back to Oklahoma. “No matter where you place, you are in the top 50 in the nation for best tasting water. Regardless of where you place, you’re one of the top in the nation and that is something to be very proud of,” Sternberg said.

When asked how it felt to know he had part in the best tasting water in the State of Arkansas, Breckenridge was humble with his response. “It is definitely an honor to win it, but the way I see it; God makes the water we just bottle it and sell it. We’re not doing anything special, we’re just blessed with great water,” Breckenridge said. “We pump it, add a little chlorine to it to disinfect it in line with what the state requires and that is it.” Breckenridge said the city possesses two wells from which water is pumped to be provided to the city. “We have two great wells and we don’t pump a lot of water every day, about 150,000 gallons but what we do pump here is good,” Breckenridge said.

Recorder/Treasurer for the City of Ash Flat Charlotte Goodwin, said in the 28 years she has served at the city, this is the first award received for water.