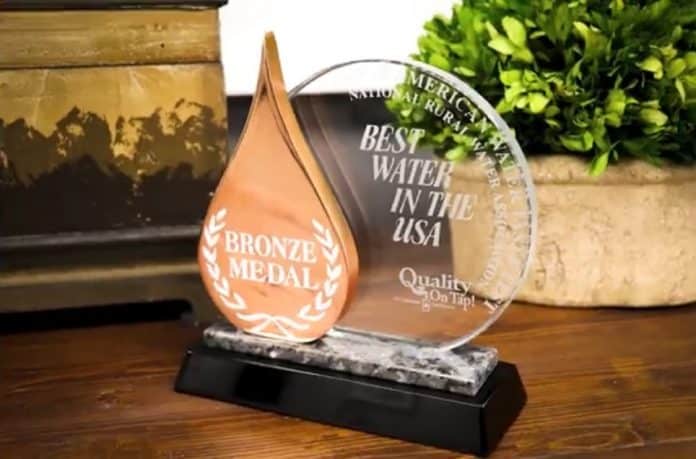 The results, announced late last week, placed the City of Ash Flat third in the Best Water in the USA competition during the Great American Water Taste Test held by the National Rural Water Association.  This followed just weeks after Tracy Breckenridge, Water and Sewer Superintendent for the city, was presented with an award for first place for Best Tasting Water by the Arkansas Rural Water Association (Story here: https://hallmarktimes.com/ash-flat-wins-best-tasting-water-in-the-state-of-arkansas/.)

According to Ash Flat Mayor Larry Fowler, the city brought home the bronze award in the national competition.

“The judging took place in Oklahoma and they had a virtual awards ceremony,” Fowler said. “Tracy got this started. He got us involved and he runs our water system. All of the responsibility of our water system falls on him, and he has done a good job for the city. He takes his job seriously and apparently supplies the third best tasting water in the country to the citizens of ash flat.”

Fowler said Breckenridge and his team work tirelessly to ensure things run smoothly with regards to water for the city.  “I hope they [the citizens] feel as blessed as I do as the mayor to have quality people working for us that try to supply the best service and quality of product to the citizens. I hope they understand what it entails. It is a seven-day-a-week job.  This system has to be maintained and looked at,” Fowler said.

Breckenridge said it was an honor to not only be selected among the top 50 best rural water companies in the United States, but to be chosen as third in the nation was even greater.

“It is really an honor. We placed third for the entire country. Maybe we can win it some day and get first place, but I am happy to hang my hat on a third place for nationals,” Breckenridge said.

Breckenridge noted competitions such as these give rural water systems the opportunity to gain some attention, something that is not often done.

“It definitely does not hurt Ash Flat’s position at all. It is a good bargaining chip to get people and businesses in here to be able to say we have some of the best water in the United States.  That is something people look for,” Breckenridge said.

Although he is the overseer of the water system for Ash Flat, Breckenridge continues to give credit to God for the quality of the water.

“We are really blessed and like I said before, I have to give credit to God, he made it. We don’t do a whole lot to it, when you watch the video [of the judging and awards], you see other water systems have filtration plants, but treat according to the state regulations and put it in a bottle,” Breckenridge said. “I can’t take credit for it. I think it is cool we got to do something like that. I want to thank the Arkansas and National Rural Water Associations for holding the competitions. It gives the water systems a chance to be recognized because ordinarily you don’t think about your water or sewer system.”

Breckenridge said he would like to thank the citizens of Ash Flat and the city council for the opportunity to serve.