Hallmark Times It matters to us, too...
Home Crime Arkansas woman faces multiple felonies in Izard and Fulton Counties 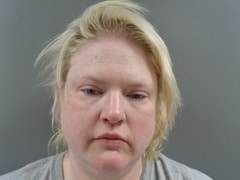 An Izard County woman is behind bars after selling methamphetamine to a confidential informant working with the Fulton County Sheriff’s Department and Drug Task Force.

On four separate occasions, between January and April of this year, 38-year-old Deanna Johnson sold the drugs to an individual working with the DTF.

Agents with the DTF met with the buyer on multiple occasions prior to the purchasing and the transactions between the buyer and Johnson were recorded.

During the buys, agents with the DTF observed the meeting and purchase of methamphetamine.

On May 10, additional charges were filed against Johnson in Izard County where she is currently listed as an inmate in the Izard County Detention Center.

The charges in Izard County stem from the execution of a warrant for arrest when officers traveled to Johnson’s residence.

Upon arrival, officers contacted Johnson and placed her under arrest. Johnson stated she had resided at the home for approximately one year. After finding a search waiver on file, officers conducted a search of Johnson’s room and found a handgun, a crystalline substance which later tested positive for methamphetamine and more. In Izard County, Johnson faces charges of simultaneous possession of drugs and firearms, a class Y felony, possession of firearms by certain persons and possession of a controlled substance, a class D felony.

Additional charges of possession of a controlled substance with purpose to deliver, a class A felony were also listed. This charge stems from a traffic stop on March 9 in which Johnson was found to be in possession of a large quantity of methamphetamine.