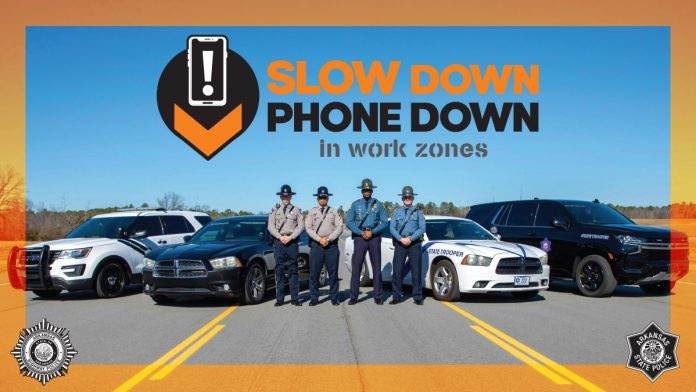 The Arkansas Department of Transportation (ARDOT), together with Arkansas State Police (ASP) and Arkansas Highway Police (AHP), announced a new work zone safety campaign aimed at cracking down on reckless and distracted driving in work zones across the state.

The Slow Down, Phone Down campaign will deploy increased ASP and AHP patrols in work zones to watch for dangerous driving. The goal is to eliminate preventable accidents.

In 2021, there were 2,140 crashes reported in Arkansas work zones – resulting in 16 fatalities and 54 serious injuries.

“The number of work zone accidents and injuries is rising at an alarming rate in Arkansas,” said ARDOT Director Lorie Tudor. “Even one injury in a work zone is one too many. We can all do our part to reverse this trend.”

ASP and AHP will be issuing citations to motorists observed using their phone, following too close, or speeding through a work zone – all of which are illegal in Arkansas.

“As crews go about their jobs improving Arkansas highways, they deserve our best attempts to make their work environment as safe as possible,” said ASP Director Colonel Bill Bryant. “State Troopers will be lending support to the Arkansas Highway Police in their effort to stop motorists who ignore the rules of the road and endanger the lives of those working to make our highways better and safer.”

“It’s our duty to protect work zones, the men and women working within them, and the citizens driving through them,” said AHP Chief Jeff Holmes.  “We have zero tolerance for distracted and reckless driving. We hope this campaign makes it clear that we need people to slow down and put their phone down when entering a work zone.”

The Slow Down, Phone Down campaign will take place statewide and will target all motorists – including both commercial trucks and civilian vehicles. For more information, click here. (https://www.ardot.gov/slowdownphonedown/)