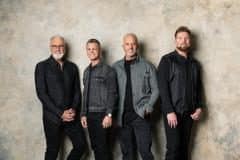 A free gospel concert will be held at the Highland Assembly of God Church in Highland June 13 at 3 p.m.

The concert will be held outdoors and will feature the award-winning Triumphant Quartet.

“Triumphant is the face of quality Gospel Music, Christian integrity, family values, friendship and dedication. The group has been that way since their beginnings in 2003, when the four friends first walked out on to the stage of the Louise Mandrell Theater, in Pigeon Forge, Tennessee as a headlining talent,” the group’s website reads.

This is not the first time the quartet has performed at Highland Assembly of God and if attendance from previous performances is any indication, it is sure to be a packed house.

“Their smooth harmonies, and rich quartet sound quickly gained them national attention, recognition and concert demand. That popularity promoted the group in 2008, from singing daily at the theater, to touring nationally and performing in major concert venues, auditoriums and churches,” the website reads. “It has also voted them the Fan Favorite Quartet in the Gospel Music field for the last several years, and each group member also being nominated for and receiving various awards. Triumphant Quartet has had multiple #1 songs and several others have climbed the Top 40 music charts. They have multiple songs and albums of the year as well, which contributed to their popularity. In 2019 Triumphant received a Dove award for their album YES, voted southern Gospel Album of the Year.”

Voted a fan favorite for the past 12 years and Artist of the Year for the last three, the group brings a lively and meaningful experience to all who come to enjoy performances.

The community is invited and encouraged to attend the gospel concert.

More information on the Triumphant Quartet can be found here.