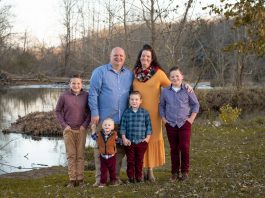 In the wake of the COVID-19 pandemic, it has become difficult to be social in a world set on social distancing and for those who work in ministry, their mission has become more challenging than ever.

Chad Townsend, the pastor of New Life Apostolic Church, located on Sharp Street in Ash Flat, relocated to the Spring River area just as the pandemic began. “I had been an assistant pastor in Monroe, La., and we were living there and going to a church in Bastrop. I had been an assistant pastor, youth pastor before. I sold out of the company I was co-owner of and started looking for a pastorate. I had actually been to this church here in Ash Flat before, just about a year after the late brother Chris Hancock had taken over,” Townsend said.

Wednesday evening, Townsend found himself seated in the small church listening to Hancock preach. When Hancock passed away sometime later, Townsend said he received a phone call from the bishop who oversees the area asking if he would be interested in seeking the position to pastor the church. “I put my name in and they gave me a call at the beginning of March of last year. My family and I came up and I preached March 15, 2020,” Townsend said.

Just four days prior, the World Health Organization had declared COVID-19 a pandemic and less than 24 hours after preaching, states began to implement policies and safety precautions shutting many places of gathering that fell under restriction, including places of worship. “So, I am probably the only United Pentecostal pastor to be elected during a parking-lot service and not be present when it happened,” Townsend said jokingly. “I was elected to serve as the pastor by the church in late April.”

Once selected, Townsend relocated to the Spring River area in May and his wife (Alicia) and children (Austin, Aiddin, Eli and Judah) followed a short time later.
Living in the area for less than a year, Townsend said he hopes to reach others and to become connected with the community, something which has proven difficult due to the pandemic.

“As I am able, I have been going around and talking to people and meeting with them, but I discovered a lot of people don’t realize where our church is and COVID has made it difficult to meet people. I had seen an article written about Brother Hancock and had the idea a story would be a good way to let people know I am here and am here for them,” Townsend said.

Since coming to the small church, Townsend said his congregation has been as pleasant as they come. “We’re visitor friendly. I tell our church I want to be known as the friendliest church in town. We’re open to anyone who would like to come,” Townsend said. The church is moving forward, they’ve got the new pastor and we just want people to know we’re here.