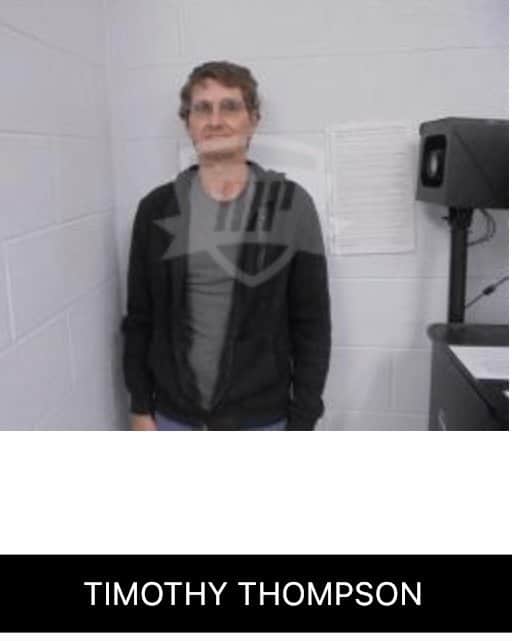 A Smithville man has been charged with incest, a class C felony in Sharp County following a report that 42-year-old Timothy Thompson had entered into an intimate relationship with a child he adopted at a young age.

According to an affidavit for warrant of arrest, on Nov 23, Detective Cham Buchanan followed up on a report that Timothy Thompson had a romantic relationship with Janie Thompson, who is now 21 years old.

Janie’s mother had contacted authorities with her concerns a learned that her ex-husband, Timothy and her daughter, Janie, had a child together.

Shortly after being married to Janie’s mother, Timothy adopted Janie and her siblings. Later, following the divorce, Janie went on to live with Timothy while the siblings remained with their mother.

Janie stated she and Timothy had married at the Sharp County Courthouse in August of 2020.

Janie told Det. Buchanan she and Timothy had never viewed each other as family but more as housemates and Timothy had married her mother for a second time when she was approximately seven years old.

After he had married her mother, Janie said she was freed of the responsibilities of taking care of her siblings and was encouraged to “be a kid” by Timothy.

In May of 2011, the family relocated to Arkansas from Oklahoma and in 2015, her mother and Timothy were divorced.

Janie said her mother was supposed to sign her rights over Janie to Timothy but never did.

When asked if there was a romantic relationship between herself and Timothy, Janie said they didn’t begin a relationship until after she turned 17.

During a post-Miranda interview with Timothy, he stated Janie had more than just father-daughter feelings for him.

“When Janie was 14 years old, he stated she had told him she planned on having his babies and the two would discuss it at least once a year until Janie turned 17,” the affidavit said.

Timothy told Det. Buchanan he and Janie had looked up the state law for statutory rape and learned they would have to wait until Janie was a specific age before feelings were acted on.

Timothy stated he told Janie when she was seven years old he “wouldn’t marry anyone else; she could have all that remained of him,” the affidavit states.

When asked if Janie had shown signs of being interested in him before she was 14, Timothy said Janie had intimate feelings for him when she was around nine years old.

When asked if there had been a romantic relationship prior to Janie turning 17-years-old, Timothy stated he had taken care of Janie since she was seven and had been there for Janie through everything.

Timothy Thompson has been charged with one count of Incest, a class C felony.