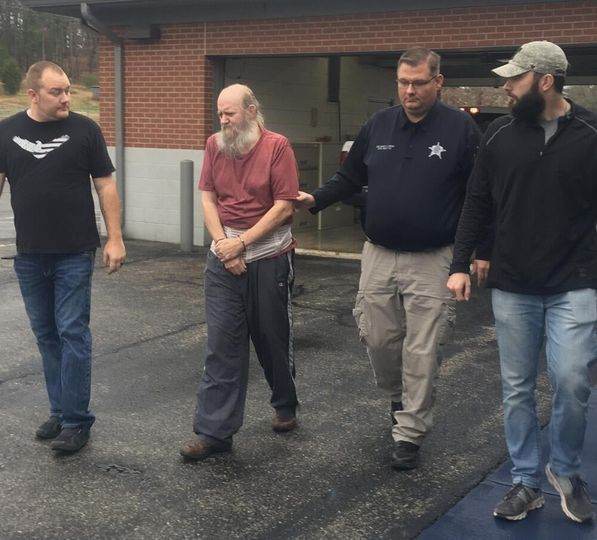 Michael David Mullins Sr., aka “Slick” of Highland was arrested Tuesday after a federal indictment was handed down charging him and others with Conspiracy to Distribute and Possess with Intent to Distribute Fentanyl Resulting in Death. Investigator J.C. Logan, Izard County Chief Deputy Charley Melton and Kolton Lane with the DEA escort Mullins into the Izard County Detention Center (first photo).

The death of an Izard County man earlier this year that was ruled a fentanyl overdose has resulted in the arrests of major drug dealers in and around Izard County, according to Izard County Chief Deputy Charley Melton.

Melton said, “This is the first time we have been able to directly link a dealer to the death of another person.” Melton said the federal indictments are a direct result of the Opioid Abuse Program Grant the Izard County Sheriff’s Office obtained earlier this year that funded two additional investigators.”They started putting together a case file that tied Mullins Sr., directly to the deceased and as a result additional information led them to others who were possessing fentanyl with intent to distribute.”When Investigators determined that the investigation was going to lead outside their jurisdiction, the Drug Enforcement Administration was asked to assist.

“Most of these individuals are familiar to area law enforcement officers, but we have never been able to connect all the individuals until now,” Melton said. Earlier this year, Fulton County placed Michael Kelly under arrest and a search of his vehicle yielded 154 Ziploc baggies with a white powdery substance that tested positive for fentanyl.

Officers also learned that Michael Mullins Sr. had made transactions with the deceased on the day he died. The crime lab would rule the overdose death as a result of the fentanyl provided by Mullins Sr.

Additional drugs were found after a traffic stop in Izard County. Officers arrested Jamey Roof and Richard Cohn who were in possession of a large amount of fentanyl. Methamphetamine and marijuana were also seized from the vehicle. Officers also made contact with Richard Cluck who gave them additional information of the drug trade.

After months of investigations by Izard County Opioid Investigators, they were able to connect these individuals directly or indirectly to each other.”We have always known that opioid use is a problem in our communities. The COAP 2 Grant has provided us with additional manpower to focus on this problem. Today, we have seen the results of that and major drug dealers are off the street,” Melton said. At press time, all warrants had been served with the exception of Noakes.

“Through these arrests we have obtained additional information that could result in additional arrests,” Melton said. DEA Assistant Special Agent in Charge Jarad Harper said, “The wreckage caused by drugs affects everyone. Drug dealers breed crime in our neighborhoods and are a danger to our children. DEA will continue to lock arms with our state, local and federal law enforcement partners, including the United States Attorney’s Office in the Eastern District of Arkansas, in an effort to save lives from drug traffickers distributing fentanyl, and other illicit narcotics in our communities. Our combined efforts will continue to bring those distributing this poison to justice across the state of Arkansas and elsewhere.