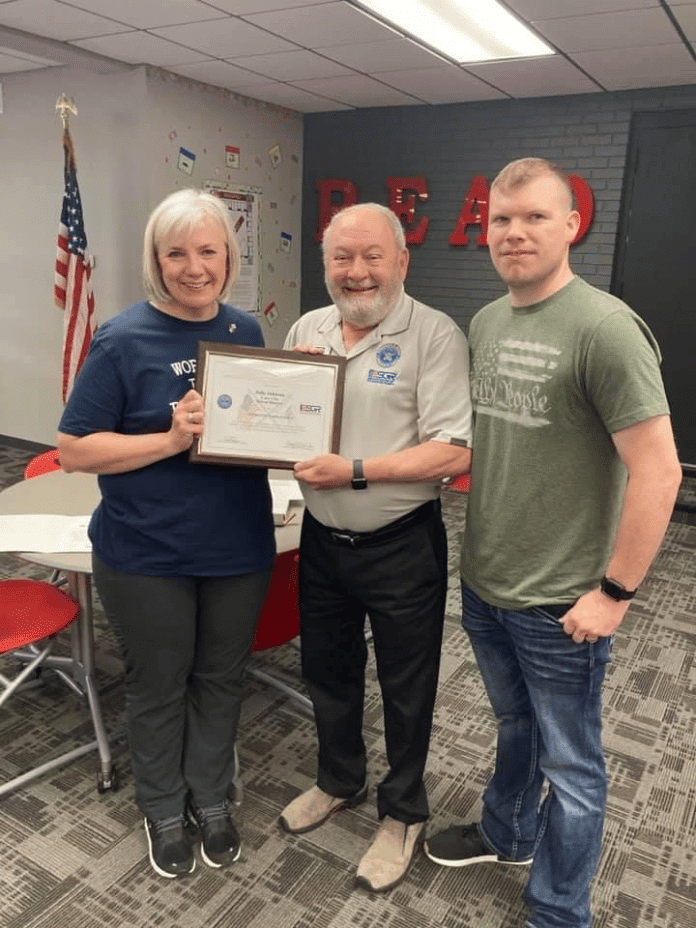 Sharp County resident Julie Johnson was recently presented with a certificate of recognition as a Patriotic Employer by the Office of the Secretary of Defense. The recognition was presented to Johnson by Defense. Retired National Guard Lt. Colonel Gil Fowler.

When discussing the award, Johnson said it was a result of a work relationship with a young man who serves in the U.S. Military approximately three years ago. “A little over three years ago, Tristan Overton began working at the Cave City School in the IT department. Tristan had served in the Army before transitioning to the National Guard,” Johnson said. “I was proud to work alongside a veteran and a young man still serving our country.”

She noted the award was very meaningful to her as her father had served in the Korean War and had also served in the National Guard. “I have a soft spot for veterans. I felt it was my duty to be supportive when Tristan was away at drill,” Johnson said.

In 2020, Johnson was recommended for the award by Overton, however; due to COVID-19 the presentation was delayed until June of this year.  “To say I am beyond humbled is an understatement.  I cannot thank Tristan enough for thinking enough of me to go to so much trouble.  I couldn’t help but think how proud Dad would have been,” Johnson said. “His girl receiving an award from the National Guard!”

The award is just one option in a series of Patriot Awards through the Employer Support of the Guard and Reserve (ESGR).”An employee serving in the National Guard or Reserve, or the spouse of a Guard or Reserve member, may nominate individual supervisors and bosses for support provided directly to the nominating Service member and his or her family. The Patriot Award reflects the efforts made to support citizen warriors through a wide-range of measures including flexible schedules, time off prior to and after deployment, caring for families, and granting leaves of absence if needed,” the ESGR website states. Patriot Awards are awarded to individual supervisors, not to an entire staff or organization as a whole.”