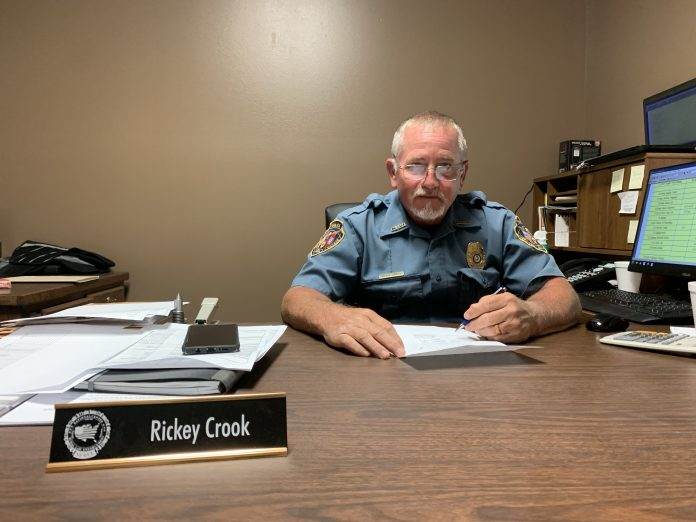 “I started as a jailer and dispatcher for Sonny Powell at the old Sharp County Jail. I worked there three years and then I applied and went to work as the Chief of Police in Ash Flat and worked there for a little over 12 years,” Crook said.

After serving the City of Ash Flat, Crook accepted a position with the Drug Task Force (DTF) and worked in that capacity for two years until grant funding came to an end.

“I then went to work for Dale Weaver who was sheriff at the time and served as his Chief Deputy,” Crook said.

After a time, Crook was presented with an opportunity to go overseas and work with a good friend for the United Nations (UN) training officers.

“I did that for 19 months before coming back to work under Henry Boyce as the director of the DTF. I did that for about 10 months and then went back overseas. After a while, the UN changed the contract to the European Union and their control. I didn’t like the terms of the contract, so I came home in December of 2008 and started working at the Cherokee Village Police Department in January of 2009,” Crook said.

Crook did not begin his career with Cherokee Village as chief, but rather served under then chief J.P. French until French was offered a position by the Attorney General working in Little Rock.

Just five months after hiring on with the department, Crook was selected as chief in May of 2009.

When asked about the high points in his career as a law enforcement officer, Crook said his first-round working as a DTF agent was one.

Crook also said one of the low points was a lack of understanding of some administrators regarding the funding and needs of police.

“Lack of understanding from the administration for funding for what any of the departments I’ve worked for have needed. It’s a struggle to really relay the needs of law enforcement because the general public and a lot of administrations don’t think cops do anything but run up and down the road, drink coffee and eat donuts and that’s a long way from the truth when it comes down to it,” Crook said. “There is a lot of community involvement. The very worst officer that has ever worked for me or that I’ve ever worked with will still stop on the side of the road and help someone anytime.”

When discussing memorable cases, Crook said one highlight was solving a large string of burglaries that were plaguing the city.

“The big string of burglaries we solved sometime back in about 2010 or 2011. They were just killing us with burglaries, we made four arrests and solved like 35 burglaries. That was a high point getting that shut down,” Crook said.

He said losing a child to an accident or drowning was undoubtedly the lowest point, anytime it may have happened.

Crook said although he has enjoyed his time in law enforcement, he is looking forward to retirement and said he intends to continue to be a part of the community.

“I am not going anywhere, even though I’m not going to be leading this department. I am still part of this community, and I always will be. My roots are here, my family roots are here and I won’t be any different without a uniform than I am with one,” Crook said.

He also noted he would not recommend law enforcement as a career currently.

“Do something else. Find another career. It is a different set of rules, different community involvement. We are blessed in this community. With the support law enforcement gets but we have got so many new people coming in that have come from places where maybe they did not have as good of a police force as we have here and are used to a different mentality,” Crook said. “It’s hard on the men and women from this area and all of the local officers I know are people persons. Interaction with people is the reason they do the job. Not because they get to wear a shiny badge, drive fast or carry a gun. It is because they get to interact with people in our community. It is just changing.”